Well, the piece is now up at draw inc., in Hamilton. Some installation views and video... 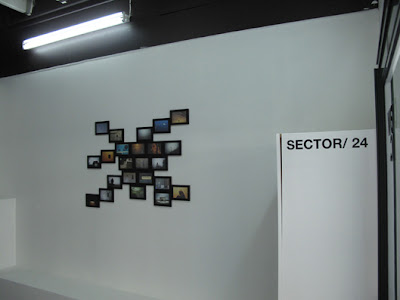 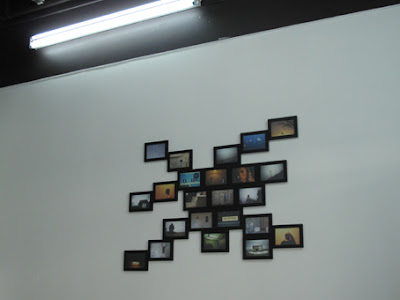 another quote apropos to the safe little world thing:
"The work you do as an artist is really play, but it is play in the most serious sense. Like when a two-year-old discovers how to make a tower out of blocks. It is no halfhearted thing. You are materializing - taking something from the inside and putting it out into the world so you can be relieved of it."
Leslie Dick, faculty of CalArts, when asked “What is an artist?” in Seven Days in the Art World, by Sarah Thornton.
Posted by andrew killick at 10:10 am No comments: 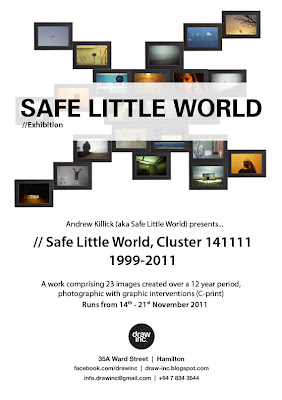 Last weekend, while visiting the World Press Photo exhibition at the Tauranga Art Gallery, I unexpectedly encountered the work of New Zealand artist/illustrator Graham Percy. Big, bad, wide world, shrunk beautifully down, as I ascended the stairs to the upper gallery, into safe little world.
Then I wandered across the road into the city library to see if they had the book of the Percy exhibition. It's called 'A Micronaut in the Wide World'.
"A micronaut" says Gregory O'Brien in his introduction to the book, "is someone who dwells on or is moved by small things; he or she is a student of miniature objects or a traveller across minute spaces. Seated at his work table in his South London town-house, Graham Percy was a micronaut par excellence. His eyes would scan the objects, works of art, postcards and books in the room. He began with these, the smallest, most unassuming of things."
"As well as being an astute observer, Graham was scholarly in his attentions. If he were to sit down with the present book, I imagine one of the first things he would do is look up the word micronaut in his dictionary - to find it derived from naut (Greek), 'a sailor'. Micro- is easily sorted. If he searched further he would find the term was used by an American [toy] distributor in the 1970s for a range of science-fictional tin figurines..."
"Continuing to research the word 'micronaut', he might arrive at Friedrich Froebel, an nineteenth-century German educationalist best known as the inventor of the kindergarten. Froebel described the child as the archetypal micronaut - an explorer who should be left to make his or her own discoveries. Since Froebel's time, much has been written about the affinities that exist between the modern artist and child. Graham Percy's approach was very much that of the wonder-struck child... Weaving together imagined and observed realities, and inspired by intellectual as well as material accumulations - the books and bric-a-brac with which he surrounded himself - his 'micronautical' art embraced the wide world beyond the personal and private.'
Boom!
Percy's love for his little world was so complete that, when he died, his ashes were placed for safe-keeping inside a scale model of the Le Corbusier-inspired house in which he and his wife lived for 26 years. The model is kept within the real house. It is made of tin, wood and frosted glass. You can put a candle in the front section of the model house so that it lights up - to remind you of Percy working on his drawings late at night. O'Brien describes the model as the "last residence of a micronaut".
I'd never heard of a 'micronaut' before, but I want that title! For this micronaut, there is too much to get excited about when I connect all this with Safe Little World.
Posted by andrew killick at 9:50 am No comments: