Stations of the Cross time again. This year I did a video for Station 14: Jesus is laid in the Tomb. Stylistically, I followed on from the work I've been doing with the Lower Bar Collective and, in fact, used an LBC track (Northern Lights) as the music.

The video utilised footage from the estuary near our house which I shot on my GoPro - the camera suspended from a leash that I dangled from a boardwalk over the water. I wanted to use the biblical immersion/baptism/burial metaphor. To that end, I grabbed appropriate scripture fragments from throughout the Bible and recombined them into a kind of poem. I then overlaid these lines on the underwater footage. 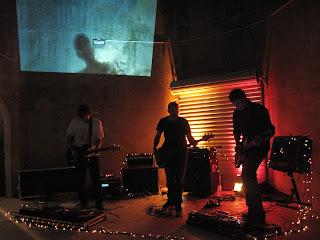 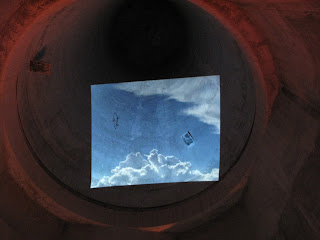 Creatively, of late, my energy has been focused on and consumed by working as a member of the Lower Bar Collective - providing the (video) visuals and graphic design for our post-rock based project.

Recently we performed at the Fringe festival in Auckland, firstly at the Whammy Bar (22/2/13), and secondly (pictured above) in the old silos at Auckland's SiloPark (1-3/3/13). At the SiloPark we did seven performances in three days. We got quite a lot of positive feedback from strangers - which is always encouraging and makes the creative process feel that much more worthwhile. Personally, for us as a collective, the silo performances provided a space for something that was extremely creatively exciting. Good times.

Aside from graphic design (for posters, a lathe-cut 12" EP and CDs), my contribution was ten videos to accompany the ten pieces composed by the other guys. These videos were a mixture of things consisting of archival footage, original photography/artwork, original footage (shot on my GoPro camera) and randomised video noise generated by a video synthesizer. For the performances, we used two projectors - one projecting onto the wall just above the musicians, and the other projecting right up into the ceiling space of the silo.

A further contribution was the use of snippets of several of my poems, played as sound samples at various times throughout the performance.

The photos above show the band performing the piece 'Infinitesima' (accompanied by an underwater video shot on the GoPro) and the projection onto the silo ceiling for the piece 'Ends in Tears' (accompanied by photographs from my Safe Little World piece 'Pride & Refuse').

More performances to come, I'm sure.
Posted by andrew killick at 5:57 pm No comments:

I had my first real encounter with visual art when I was in my second year of university. When I say "real", I mean of the type that does what art - ideally - will do... send a pang through your gut, flip your soul and set up a buzz at the back of your head. It'll make you feel sick with the best kind of longing. It was at an exhibition* at the Auckland Art Gallery. For this viewer, it was a stroke of curatorial genius as piece after piece revealed itself and stuck deep.

Amongst this revelatory collection, I rounded a corner and there was 'Black Phoenix' (I always remember the title as 'Burnt Phoenix') - a gritty, real, monolith of a piece, the singed wooden prow of a full-sized boat fastened to the wall - a pathway of charcoaled timbers leading towards it. I embraced it as my favourite work of art, and it remains so today. I memorised the artist's name, Ralph Hotere.

Around another corner, and he hits me again. This time it's with 'Black Water' - a collaboration with Bill Culbert. "In the beginning, the earth was without form and void, and the Spirit hovered over the face of the deep." Black Phoenix notwithstanding, Hotere's particular genius manifested itself in part by the use of glossy black - a fruitful, verdant, reflective black. It was the loam out of which all life sprung at creation, and a surface on which you often catch a reflection of yourself. It this case, the glossy black was on an expanse of corrugated iron throwing back the light of multiple neon tubes springing from its surface, standing like sentinels.

In my third year at university, I purchased the book, 'Out the Black Window', and set about writing an essay for my stage 3 New Zealand Literature paper on Hotere's collaborative use of poetry in his art. The essay was well received. It was my first proper success at university and it had such an impact on me that I considered launching onto a path of becoming a career art writer. The idea still sounds attractive.

My brother, a photographer, was working at a Parnell cafe at the time and had struck up a rapport with the photographer Marti Friedlander. Among the stories that get repeated about Friedlander, one of the common ones is about her access to Hotere. Hotere was famously shy, if not reclusive, but he let Friedlander in and she captured the man on film. Over thirty years later, these are still the most significant photos of Hotere.

Somehow (my brother passed it on I think), Marti ended up reading my essay on Ralph. She endorsed the idea of me pursuing an art writing career. This was all very well, but my heart and ambition was absorbed at this time with a different pursuit - I was clothing myself in the full intention of becoming a great New Zealand poet.

I had just completed a fairly angst-ridden, long (booklet length) piece called 'The Birth Place' and somehow hatched the idea that Ralph Hotere might like to read it. I thought he might like its grand themes of birth, death and rebirth, perhaps to feel a kinship in our artforms (you know, of course, that I really hoped that one day a line or two of mine would appear in one of his paintings). There was way too much catharsis in the poem for it to be literarily excellent - it was mostly a splurge - but what did I know? I was 23.

As a favour, Marti gave me Ralph's address (she is absolved, she did it on the strength of one essay, she never read my poetry). I crafted a letter, dropped names (as I have here), pinned it to a copy of my booklet, placed the whole lot in an envelop and sent it with a sense of excited trepidation.

I never heard back from Ralph. His silence, if he ever got the booklet, was probably the best favour he could have done me. I hope he threw it out. I hope he didn't pop it in a shoebox with an assortment of other ephemera received from sickly admiring fans. I hope it isn't found when someone goes through his papers now that he is gone. Perhaps he turned it into ashes - he always was a great proponent of fire - in his hands the burning of that poem would have become art - a fitting, the best and most wonderful end. 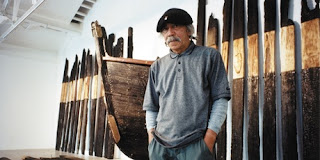 * My memory tells me it was at the exhibition 'Toi Toi Toi'. This exhibition was utterly remarkable, but researching the facts reveals that my mind has created a mythology about it being my first real encounter with visual art and the first place I encountered Hotere's work. Chronology reveals that it wasn't (on either count). But I like the mythologised version better.
Posted by andrew killick at 10:53 pm No comments: