This is the final station I did, Station 2: Jesus is made to carry the cross...
For this one I utilised a style I've been working with for a while now - structuring it as a cluster of small framed prints, and drawing on images from a library of photographs that I've taken over a 15 year period. In fact a couple of the images I used for this piece I also used for the station I did for the Cityside event nine years ago (although that one involved the images being looped on a television set rather than printed and framed).
For the St Luke's event, I used war images photographed off the screen from TV war documentary and news footage. I put the cluster in a slanted / slash shape to reflect the idea of strife and also the forward angle of a person carrying a heavy weight.
This was the most 'obscure' of the three pieces I did, so I included a supporting statement:
When Jesus carried the cross he took on his shoulders one of humankind’s most notorious weapons of execution. Politically, he was carrying the weight of the judgement of the world’s major super-power – the Roman Empire.
Despite Jesus’ actions on the cross, we have continued to devise weapons and tried to conquer each other.

War is where all of humanity’s worst traits come out, so it serves as a fitting metaphor for what was laid on him.

In carrying the cross, Jesus chose to carry our strife, hatred and suffering (past, present and future) and the pain we inflict on each other and inflicted on him.
Here's a mock-up of the piece - each photographic print is 6x4" (click to see it a little larger): 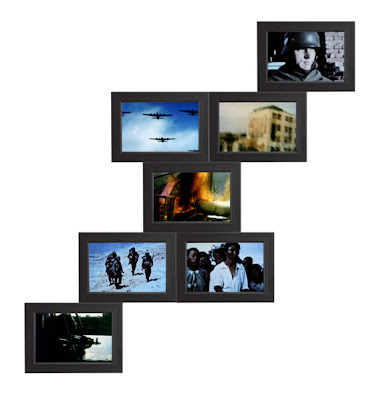 The second station I did (and I'm actually posting these in reverse order) was Station 12: Jesus dies on the cross.
I did this station once before, for the Cityside Stations of the Cross exhibition in 2003 (but with a different piece)... I always feel like this is kind of the climax of the story that the stations tell (seeing as the resurrection isn't part of the traditional stations) so there's probably a bit of pressure on this station from an art perspective. Anyway, I went pretty subtle.
The style of the image is actually one that I'm working on extensively at the moment, so I utilised it for this piece. Essentially the method involves taking a human form, reducing it to lines (sort of a schematics of the exterior of the human body) then 'exploding' it, dragging points and lines out from the schematics to describe the path of particles flying outwards from the body. It has something to do with showing that the body is fragile - made up of particles and bound together by whoknowswhat.
In the figure of Jesus, I hope it demonstrates that he is human, making a sacrifice, the creative energy of the universe (the breath of God) exiting as his life is given up. I also consider the particles to be a representation of humankind's sin that attached itself to him in the sacrifice.
The working method is digital but once it was printed out onto art paper, I wanted to do a non-digital intervention. The original concept was to use wine as my water colour pigment. In the event, it turns out that merlot dries to a kind of violet colour. Quite a nice colour actually, but not very indicative of blood. So I added a red water colour pigment to the wine - which gave me the final result.
I had hoped that the smell of wine would persist on the piece - and it certainly did while it was wet, but after it dried the smell mostly disappeared. So I put the piece behind glass in the end seeing as there wasn't much chance of the wine smell being obvious anyway. The wine is still there in the process though and I think that's important.
When the piece was set up for the stations, it was framed in a light wooden box frame and lit with a votive candle on either side (click to see the image a little larger). 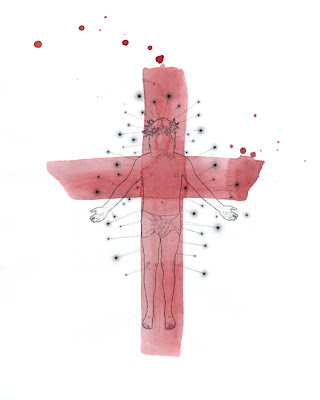 This year St Luke's had a Stations of the Cross Easter art event... over the next few days I'll be documenting the three pieces I did for this.

A bit of background: The Stations of the Cross dates back to the pilgrim trail through Jerusalem (probably during the 1400s), in which the faithful would retrace the traditional route that Jesus took on his journey to death. The pilgrims would pause for reflection at significant sites. These 'stations' (usually 14 of them) were transplanted back to Europe and recreated in various forms and places so that the faithful could make the same observances without travelling to Jerusalem.

In Europe (and subsequently other parts of the world), these stations were given artistic representations. Historically, these exist as a fine example of Christian art.

I'm not sure of the contemporary history of utilising the stations globally, but in New Zealand the practice was reinvigorated in 1998 (and in subsequent years) by Mark Pierson at Cityside Baptist Church in Auckland. In this context, the stations became an annual and serious art happening that drew a certain amount of mainstream attention. Artists from the Cityside community were each given a station to interpret as they saw fit. Cityside's exhibition became an impressive and immersive experience, and the concept was picked up by other groups around New Zealand - perhaps most notably by Peter Majendie in Christchurch and Dave White in Hamilton.

On a smaller scale, the concept of the stations of the cross being used as an opportunity for artistic expression at Easter has been picked by Christian communities around the country, and has almost certainly played a part in contemporary Christianity rediscovering and more actively engaging in the visual arts.

Which brings us to a couple of consecutive Sundays in April 2012, and to St Luke's - a little church in Mount Maunganui that meets in rugby clubrooms.

Station 14: Jesus is laid in the tomb

I've been wanting do some model-making for a while now. It seems like a logical interpretation of my safe little world concept. So I seized the opportunity to do a fairly literal piece for Station 14.

I collected materials from around the place: an unbelievably beautiful stone from the beach at Kaiaua on the Firth of Thames, a square of MDF board from the Seagull Store at the Thames dump, some chicken wire mesh, some two dollar shop poster paints, some newspaper, PVA, some dirt and some special model-making 'grass' from the model shop. The piece was further sparked by a little wooden life drawing posable model that I discovered by accident at AJ's Emporium. When wrapped in crepe bandage, the model became the body.

The final piece was interactive. The viewer was able place the figure into the tomb, feel the weight of the stone and then place it over the mouth of the tomb to seal it up. 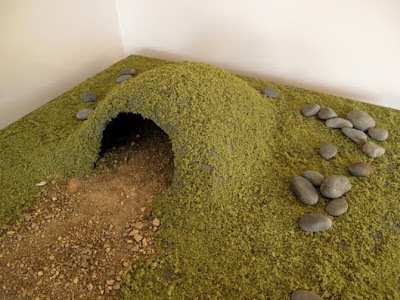 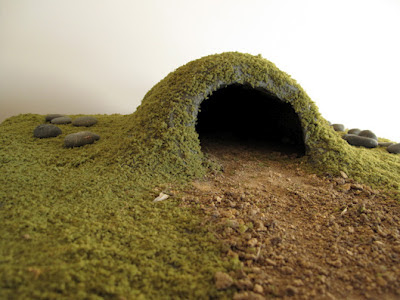 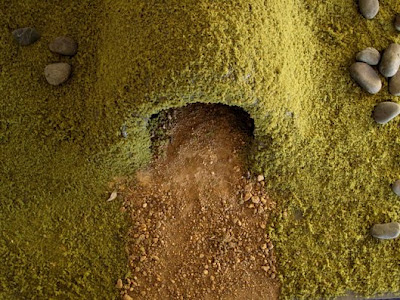 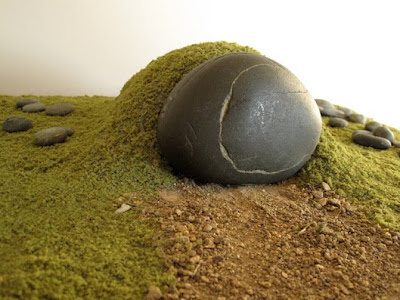 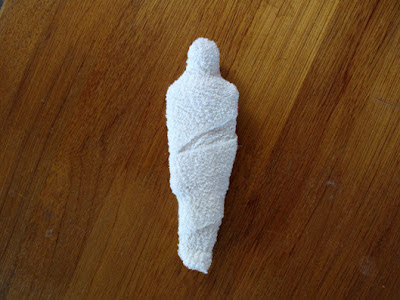 And here are some progress shots... 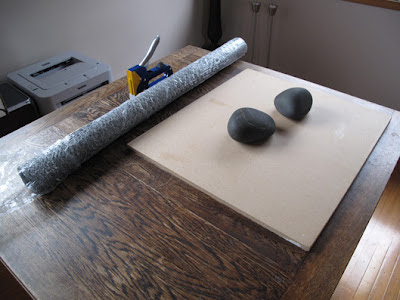 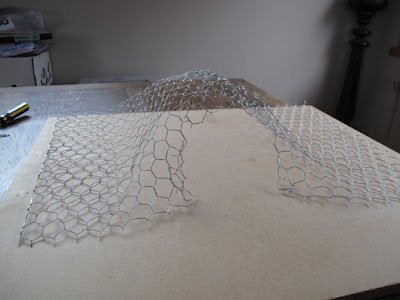 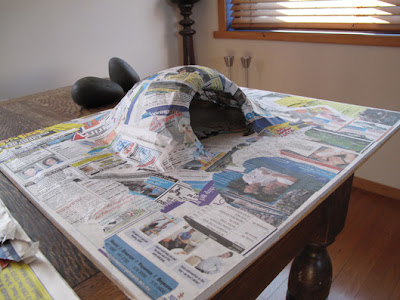 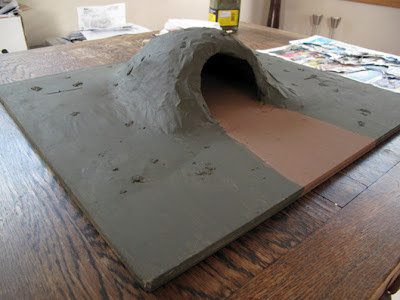 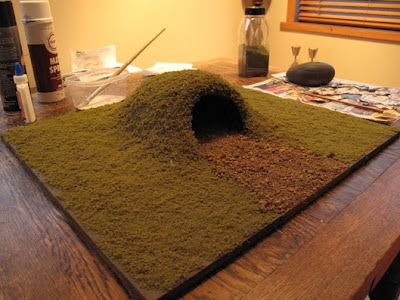