Early this week I watched an interview with Dean Barker on Campbell Live. Over the last few weeks, you could have caught me in front of the TV at 8.00am most mornings watching the America's Cup racing, and you would have assumed that I was a bit of a fan, and I would have agreed. You would have caught me yelling abuse at Oracle, when they forced Team NZ into 'irons' before the start of one of the races and then claimed two penalties when Team NZ had no option but to touch boats. You would have seen my mood darkened a little for the rest of the day on losing days. You would have seen me relishing the American commentators' mispronunciation of Oracle skipper Jimmy Spithill's last name - accidentally separating out the last syllable and thereby making the distinct syllables too obvious. Spit Hill. Things like that betray the fact that I was quite caught up in the drama of the event.

But as I sat watching the Barker interview the other night, I was struck by just how deep my feelings ran. They tapped into something more deeply cultural and a part of my life than I realised.

There are a couple of things. The first is about this Dean Barker fellow. He is a man who embodies a number of New Zealand cultural ideals. He is another in the vein of a handful of New Zealand national heroes such as Ed Hilary and Peter Blake. We can't place him in their league just yet, but he embodies a number of the characteristics that we New Zealanders admire. Humble, loyal, dedicated, determined, passionate in a way that speaks through action rather than words.  And, like the best of our heroes, he engaged a challenge that was made all the more difficult by the odds and by the modest resources at hand. By the nature of our size in the world, our national psyche is drawn to David and Goliath scenarios.

The second awareness I was struck by was how much sailing is part of me. Growing up in Auckland, and spending holidays in the Hauraki Gulf, the sea and boats were a normal part of my life. My father was a passionate sailor in those days - I'm not sure where his love of sailing sprung from, but he served his compulsory military service in the navy. On one occasion he was summonsed to the bridge - mistakenly, it turned out. A ranking officer had asked to see 'Killick' and the messenger, apparently unaware that it's naval tradition to call a Leading Seaman 'Killick', instead fetched my father, a lowly teenager wondering why on earth his presence had been commanded. The nickname comes from the fact that a Leading Seaman's insignia is an anchor, and 'killick' is an old word for 'anchor'.

When I was a kid, boats were everywhere. At one count, our family had a total of about eleven or twelve water craft hanging around the house. Dinghies, canoes, windsurfers, yachts - those sorts of things. You wouldn't know from watching the America's Cup today, but sailing wasn't necessarily the domain of the rich (at least when I was kid). There were plenty of 'dungers' on the harbour - every man and his dog had a boat of some sort.  I actually wasn't all that into sailing myself. I was more likely to be working on my colouring-book below deck or wondering why it was better to have a yacht than a launch, given that a launch gets you there much more quickly. Sometimes I was reluctant ballast or, as I got older, put in charge of the headsail (it's pronounced 'headsil') sheet as my father piloted his tan-sailed gaff-rig dory up and down Bon Accord Harbour on Kawau Island.

But it gets inside you nonetheless. The sea, the wind, the shower of spray, looking up at the top of the mast as it twitches against the clouds - knowing that the ocean and the elements are perhaps too powerful to play with, and that it is only by their goodwill that you are allowed to feel moments of mastery.

In the 1970s, my father's passion for sailing took him to the limits of the sport - ocean racing. Auckland to Noumea. And Fiji on another trip. In accordance with this, the main and insurpassable sporting event in our household was the Whitbread Round the World Yacht Race, with names like Peter Blake, Digby Taylor and Grant Dalton. Up at Kawau Island we'd listen to Pete Montgomery commentating on the radio as the boats entered the Hauraki Gulf after days at sea. My father and I climbed up to a high vantage point on the island and saw the leading boat emerge into view. I remember seeing Steinlager (or was it Steinlager II?), in strong wind, powering on towards Auckland harbour - red against the green sea.

Amongst all of that, and in a similar context, the America's Cup entered our consciousness. Firstly via the successful Australian challenge in 1983. Then in 1987, when I was 10, the New Zealand era commenced. KZ7 losing to (Dirty) Dennis Connor in the challenger series, and then Connor taking it back from the Australians. Then 1988 and the Big Boat - more dirty tricks. By now it's all become part of New Zealand legend. And then in 1995, NZ's Black Magic wins the cup.  There is quite literally rejoicing in the streets. My best mate and I catch the bus and head into Auckland City for the ticker-tape parade to welcome the cup to its new home. Jubilation and, it would seem, one of the greatest things ever to happen to Auckland and New Zealand. It's an experience hard to describe but, as Team NZ passes by on the back of truck, with streamers everywhere I think I get eye-contact with tactician Brad Butterworth and I see there what I take to be the look of a man utterly humbled by being in the midst of the celebration and even somewhat bemused by the fuss.  If ever I'm proud to be a New Zealander, it's at this moment.

There are more ups and downs to the story in the years that follow - more drama, victory, betrayal and disappointment. And as I sit and watch the Dean Barker interview, I  look back and see now that as the modern history of the America's Cup ran parallel to my formative years, it wove its way into my psyche and the essence of my New Zealandness.

As the interview finishes, I know that it would indeed be a strange thing not to see New Zealand competing, and it would be unfinished business and deeply unsatisfying not to witness Dean Barker one day lift the cup.

Pictured below... (Top) My father, in the 1970s, somewhere between New Zealand and some Pacific island.  (Bottom) Me, age two and a half, standing in front of the dinghy 'Clive' on Kawau Island. 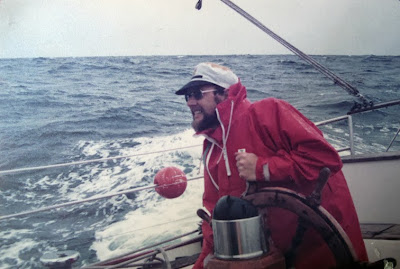 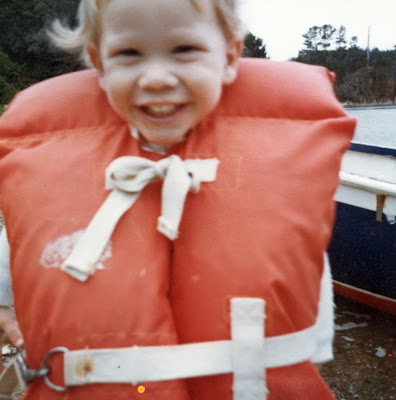 Posted by andrew killick at 7:55 pm