Pride and Refuse: the installation (Transitions 2014)

In the first weekend of November 2014, the Lower Bar Collective (LBC) put on a three-day event at the Silo Park (Silo 6) in Auckland's Wynyard Quarter. This involved inviting other sound / experimental artists and visual artists to utilise the silo space. Other than providing the video content for the LBC performances (as usual), I also installed a piece in one of the silos called 'Pride and Refuse'.

The genesis for the 'Pride and Refuse' piece came about a number of years ago after reading Pensées by Blaise Pascal, and in particular the following quote, describing the paradoxical nature of humankind:


“Judge of all things, imbecile worm of the earth; depository of truth, a sink of uncertainty and error; the pride and refuse of the universe.”

From there, the concept was matched with an aesthetic idea I had been playing with, doodling humanesque outline figures. I was interested in picture clusters and so decided to create a cluster in which these figures appeared against various impressive skies. These skies were eventually photographed from our balcony in Brookfield over several months and combined with the existing figures that had been drawn sometime earlier. The result can be seen here.

By this time I had reached a place where I felt like I had a enough work I was happy with to begin putting out exhibition proposals to several galleries. I constructed a proposal for a Safe Little World exhibition, consisting of four large clusters of small photographs, some with graphic interventions (I call these images photo/graphic).

This resulted in my first showing at Draw Inc in Hamilton, though just one of the four pieces was shown. The proposal was declined by another gallery (Blue Oyster in Dunedin), but came back with constructive criticism. The advice was to focus the conceptual frame of my proposed exhibition.

This was fair critique. Although the four pieces in the proposal were linked by my general safe little world concept, they didn't tell one particular story as a group of works.

Within the wider safe little world idea, conceptually I was most interested in the 'Pride and Refuse' cluster, and knew it had an aesthetic and conceptual link to another of my pieces - one named 'Falling / Rising', a cluster of nine photographs I had taken of a white cloth dummy in mid-flight (here).

I had been wanting to try out other media, so I decided to flesh out the pride and refuse concept and make the connection between the 'Pride and Refuse' cluster and the 'Falling / Rising' cluster more explicit by the addition of 15 cloth dummies to be suspended from the ceiling in a cloud (one dummy for each of outline figures in the 'Pride and Refuse' cluster, and modeled on the dummy that appeared in the 'Falling / Rising' cluster) and 15 adhesive vinyl outline figures, of similar dimensions to the cloth dummies, to be applied to the floor. This would give me an installation consisting of four elements (the two existing framed clusters plus the two new elements) - and possibly five with the addition of an ambient soundtrack provided by the LBC. I made a proposal based on this new installation idea to a gallery in Wellington, which was declined.

Since performing in the silos for the Auckland Fringe Festival in early 2013, the gentlemen of the LBC had fallen in love with the space and entertained the idea of staging our own event in there.

The idea was conceived to invite other sound artists and visual artists into the space for a weekend. The Auckland City Council approved our plans and gave us use of the space.

The silos are configured in an interconnected set of six (hence 'Silo 6'), and offer a unique acoustic space and industrial setting. It was the perfect opportunity for me to utilise the 'Pride and Refuse' installation in one of the silos.

With this project greenlit, I now got underway (for the first time) with actualising the elements of the installation.

Prior to this, I had already been thinking, without any particular opportunity being confirmed, of getting the pieces made so that the installation was at least out of my head and into a more concrete form. I had already asked my father-in-law, René, (a wizard at constructing things with a sewing machine) if he would be prepared to make the cloth dummies, and had obtained quotes from signwriters for making the adhesive vinyl outline figures.

Using the original cloth dummy (the hero of the 'Falling / Rising' cluster), René now made a pattern and got to work on 15 new dummies. The vinyl adhesive figures were taken care of (beautifully and very generously) by Benefitz in Auckland. Meanwhile, I had the 24 photographic images printed for the two clusters and then framed them up.

The elements were completed and duly assembled. Anna, my wife, was unwell at the time but I thought I'd still manage to complete the installation with a daytrip to Auckland. In the event, she was too unwell for me to go away for that long, and it looked like the project was going to stumble near the last hurdle.

The collective kicked into action, and LBC members Mal, Matt and Rob went above and beyond to make it happen. In the midst of all the chaos of the other organisational aspects of the Transitions event, Mal (in particular), with help from fellow exhibiting artist Kristin, spent several hours installing the piece after it was sent to Auckland on over-night courier. This was no mean feat considering the piece had never been installed before. A few relatively minor technical challenges presented themselves and were solved, via Mal's initiative, my detailed written instructions and a few phonecalls between us.

Utilising one of the silo spaces, the two photo/graphic framed clusters were hung on the concrete walls (using 3M Command Adhesive strips). The 15 dummies were suspended in the centre of the space by fishing line from the existing hopper structure, and the vinyl adhesive figures were applied to the floor.

It was also a massive privilege to be exhibiting alongside the other visual artists that we had invited into the space for the Transitions event: Belinda Griffiths, Beau Cotton, Arthur Amon and Kristin Herman.

Following are a number of images that document the piece: 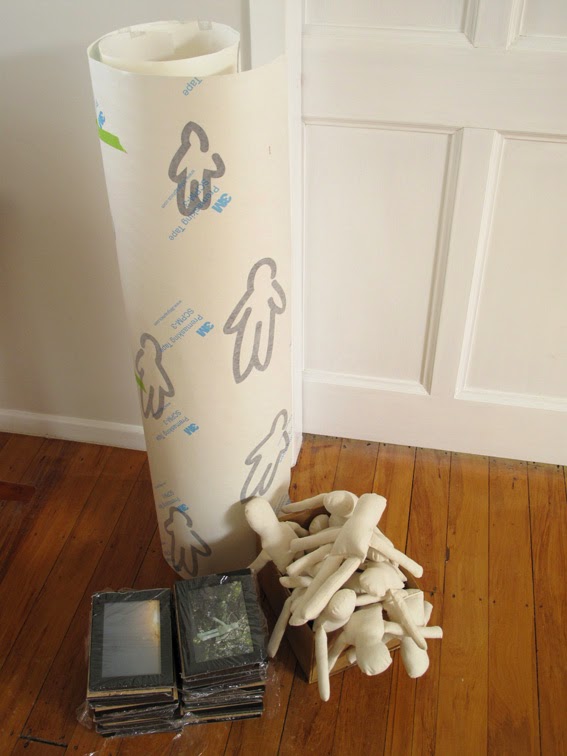 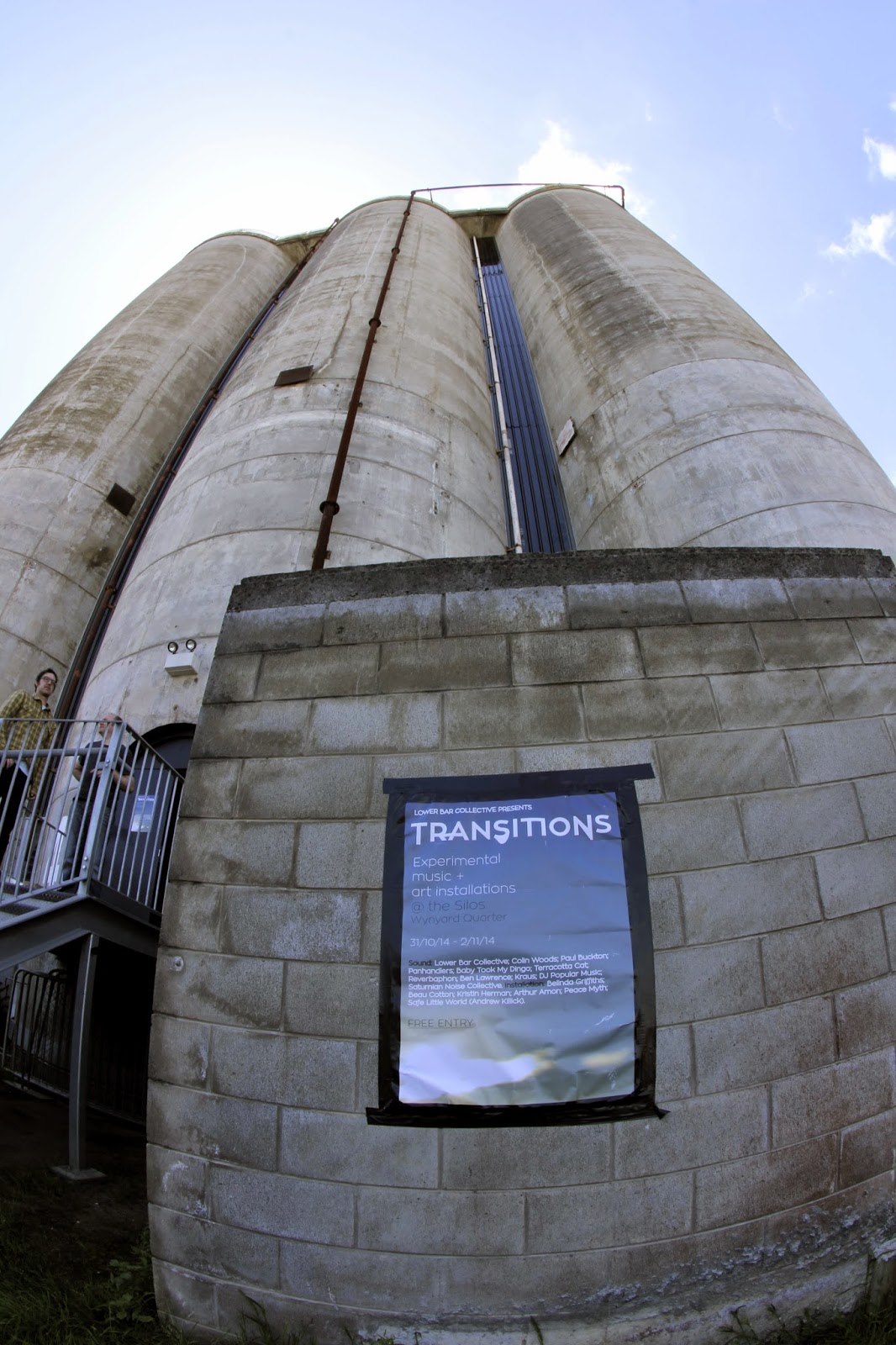 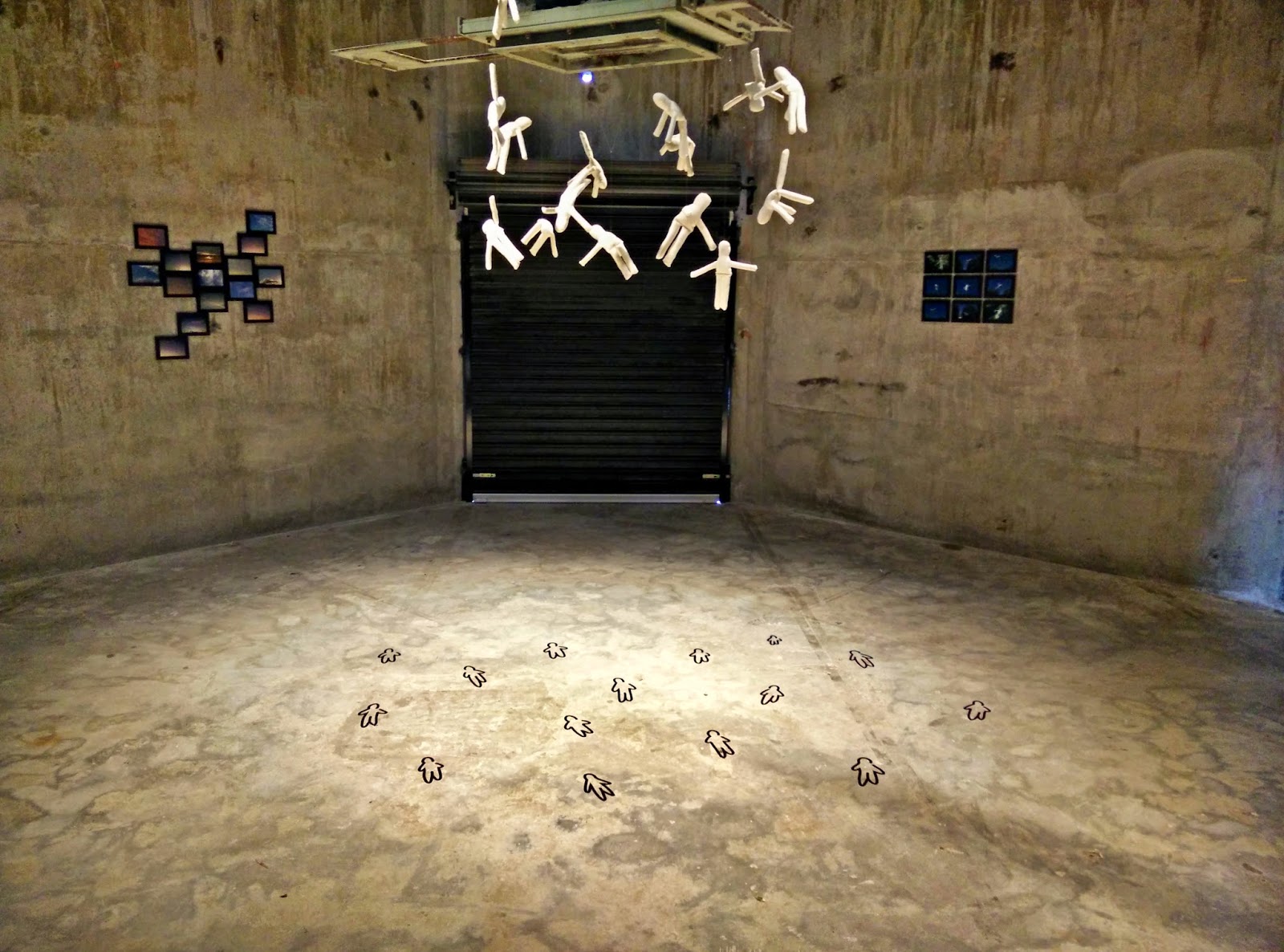 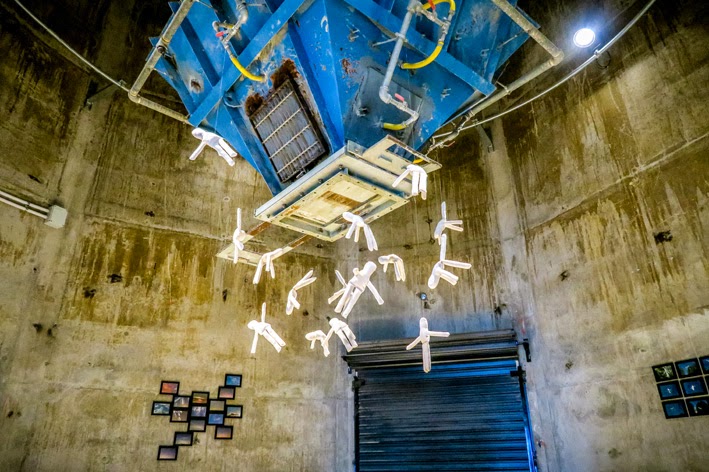 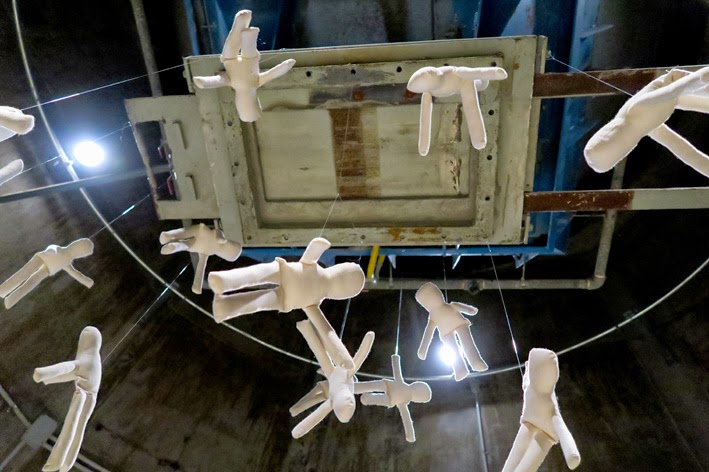 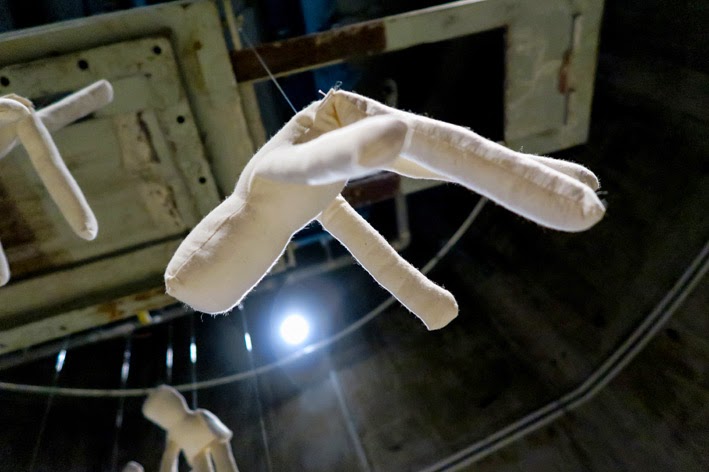 The last three images were shot by, and are courtesy of, funkypancake.

Although the fifth element of the original concept (an LBC audio soundtrack) wasn't part of this installation per se, over the course of the weekend the piece was immersed in incidental sound provided by the various musicians and artists who performed. Actually this is probably the aspect that I most regret missing out on - experiencing in person those various sounds enveloping and adding layers, by proximity, to my artwork.

Three evocative pieces of media that relate to this sonic context emerged from the weekend. The first is an image of Colin Wood playing his saxophone in my space. The second is of the act DJ Popular Music using my space for part of their dance performance. The third is a video shot by funkypancake of the LBC's opening performance. The video features my cloth dummies in the opening minutes and also gives some idea of the silo space in general. The music is a piece called 'Nana'. 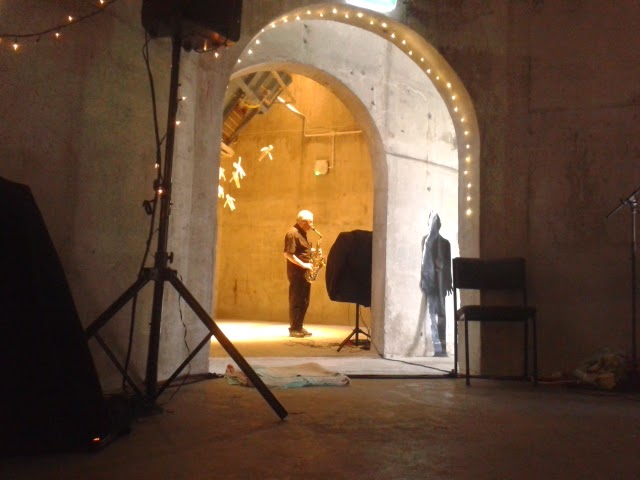 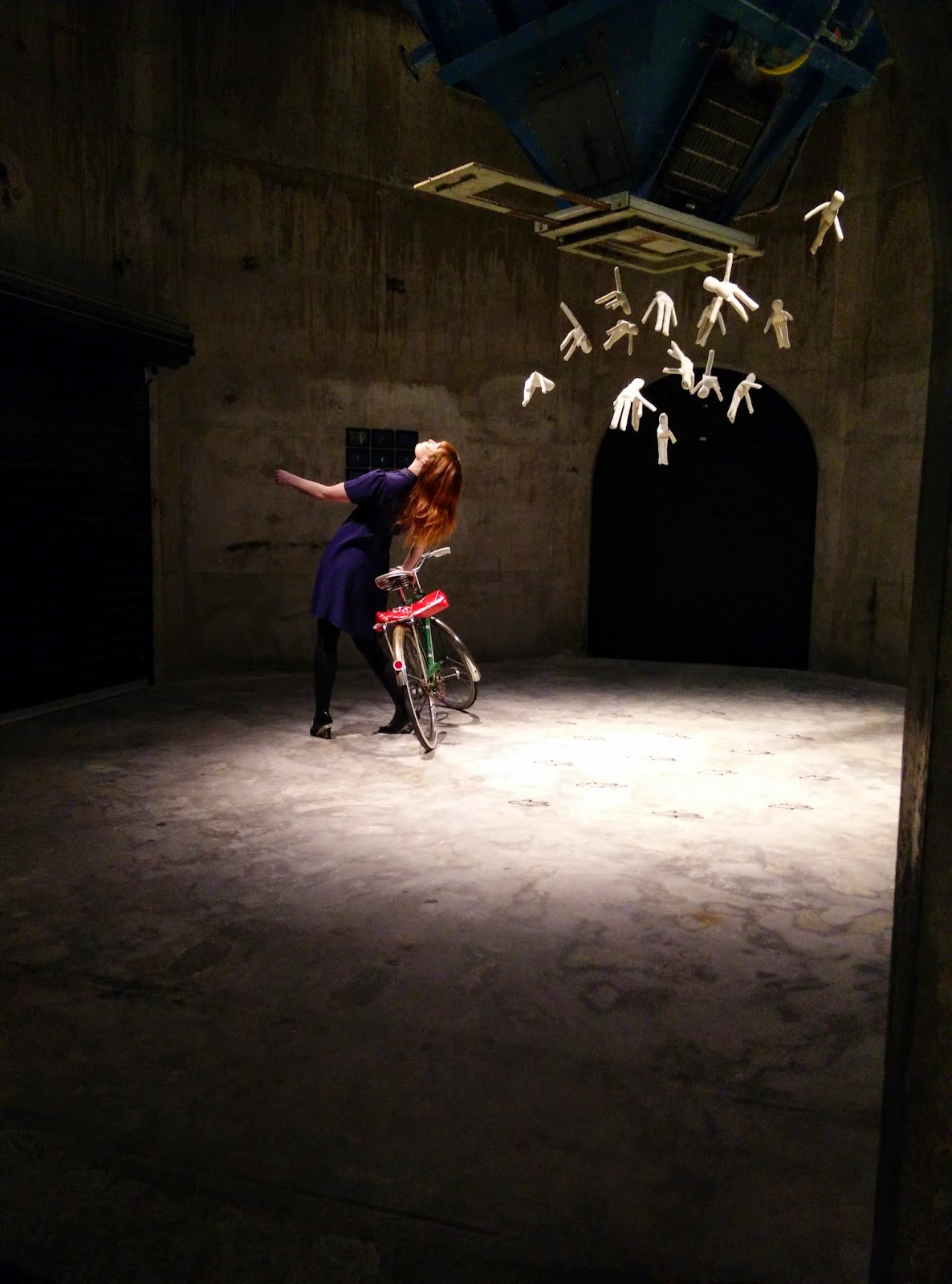 Art emerges from community. A number of people made this possible out of the amazing kindness of their hearts. Malcolm Dunn, Rob Morgan and Matt Findlay of the LBC for making the installation happen even though I couldn't be there in person. René Sjardin for patterning, stitching and stuffing. Aidan and Simon of Benefitz (a superb printing company in Auckland) for the adhesive vinyl figures. All the people who donated to the PledgeMe campaign I ran back in 2011 that enabled me to buy all the frames for the clusters (and Harrison Frames who gave me a great price at the time). Anna, my wife, for putting up with my ramblings and thoughts-in-process, and giving me a free hand to create the artwork.
Posted by andrew killick at 5:42 pm

It was great to have the installation up. Interesting to hear more of the background and progression of it all. Looking forward to what we can do in 2015! PS Kristin helped a lot with getting the frames up.

Cool thanks - have amended the text to acknowledge Kristin's help! Thanks Kristin!